On 27th October 1987, a black day in Malaysian history,  ‘Operation Lallang’ happened, This massive crackdown using the draconian detention without trial law, the Internal Security Act 1960(ISA) resulted in about 106 human rights defenders, politicians and others being arrested, and detained, some for almost 2 years. The Home Ministry also withdrew the printing and publishing licenses of the Star, Sin Chew Jit Poh and Watan, which was restored almost 5 months later on about 22/3/1988 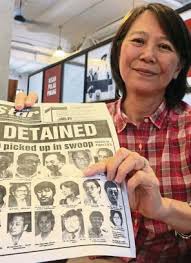 Whilst, the ISA was repealed in end July 2012, other draconian Detention without Trial(DWT) laws like the Prevention of Crime Act 1959 (POCA), Prevention of Terrorism Act 2015 (POTA) and the Dangerous Drugs (Special Preventive Measures) Act 1985[DD(SPM)A] still remain, and many persons continue to be arrested, detained and/or restricted without trial in Malaysia.

DWT laws allows the Executive to administratively detain/restrict persons for reasons that cannot be challenged in courts, and as such LIES and falsehood can be used. The reasons or justification for the use of such DWT laws cannot be challenged in courts. Hence, the judiciary’s role in a democracy, to serve as a check and balance to the actions/omissions of the Executive is removed.

Since the abolition of the ISA, the scope the current DWT laws are so much wider, to now even include even ordinary Penal Code crimes. A suspected thief may also be simply be detained without trial, and not be accorded the right to a fair trial.

DWT laws undermines the rule of law, justice and human rights – denying the right to fair trial, and even violating the fundamental principle of presumption of innocence until proven guilty.

Article 10 of the Universal Declaration of Human Rights (UDHR) provides, ‘Everyone is entitled in full equality to a fair and public hearing by an independent and impartial tribunal, in the determination of his rights and obligations and of any criminal charge against him.’

Article 11(1) of the UDHR states that, ‘Everyone charged with a penal offence has the right to be presumed innocent until proved guilty according to law in a public trial at which he has had all the guarantees necessary for his defence.’

Current leaders of DAP and Amanah like Lim Kit Siang, Lim Guan Eng and Muhamad Sabu were also victims, with many other politicians from DAP and PAS. Anwar Ibrahim, the leader of PKR was also twice a victim of the ISA, in 1974 and thereafter in 1998, but he has been criticized for his silence during Ops Lallang when he was then part of the Cabinet.

MADPET(Malaysians Against Death Penalty and Torture) is disappointed when the then Pakatan Harapan Plus Government, that included PKR, DAP and Amanah, failed to do the needful and abolish speedily all remaining Detention Without Trial laws including POCA, POTA and the DD{SPM]A. Judicial review of the reasons for the arrest, detention and/or restriction are still not allowed, and that could have been remedied easily by an amendment.

The Pakatan Harapan Plus government also failed to even table Bills that would lead to the repeal, not even Bills that will finally enable courts to review reasons why DWT laws are used against victims – judicial review. If there was no time, Bills could always be debated and passed at subsequent Parliamentary sessions.

Even if politicians are not victims of DWT laws, people are still

Even though, prominent politicians may have not fallen victim to these remaining DWT laws like POCA and POTA, other persons continue to be victims of DWT laws, and any justice loving person or party must be committed to repeal all DWT laws. A caring government committed to justice will repeal such DWT laws, and ensure everyone is accorded the right to a fair trial. 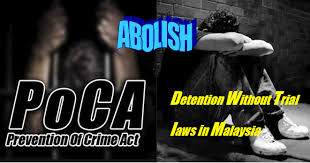 MADPET reiterates our call for the immediate repeal of all DWT laws, including POCA, POTA and the  DD{SPM]A.

MADPET also calls for the immediate and unconditional release of all persons currently detained and/or restricted under DWT laws in Malaysia.

Malaysia must respect the principle of presumption of innocence until proven guilty in a court of law. If anyone has allegedly broken any Malaysian law, then he/she must be investigated, charged in court and accorded the right to a fair trial.

Posted by Charles Hector at 4:53 AM No comments: