MADPET(Malaysians Against Death Penalty & Torture) is shocked by the conduct of the Malaysian police who forcibly dispersed a peaceful assembly of about 500 persons on Sunday(28/5/2006) at Kuala Lumpur City Centre(KLCC) using brutal and excessive force. These persons were there at about 10.30am in front of the Kuala Lumpur Twin Towers exercising their constitutionally guaranteed right of peaceful protest and legitimate dissent. This group included women and children. They were there expressing their opposition to the recent fuel hikes and the increase in electric tariffs, which were adversely affecting the majority of Malaysians.

In total disregard of their fundamental rights, these brave Malaysians were fired upon by an FRU(Federal Reserve Unit) water cannon and subjected to unreasonable force by FRU and plainclothes police personnel under the direction of the OCPD of Dang Wangi police district ACP Kamal Pasha.

The manner in which the police used violence on the crowd which resulted in about 3 persons suffering head injuries is deplorable and completely unacceptable. One victim was kicked and beaten by police in front of his two young daughters. 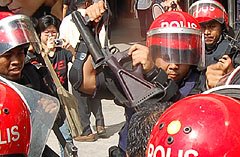 canister launcher on the naked head of a protester. This is reminiscent of South Africa during the days of the Apartheid regime. This horrifying image, which will long endure in the minds of all peace-loving Malaysians, is itself an eloquent argument for the immediate formation of an Independent Police Complaints and Misconduct Commission(IPCMC).

We demand that immediate action be taken against the policeman who used the butt end of the tear gas launcher to assault a protester , ACP Kamal Pasha and all other policemen responsible for the 28th May attack on peaceful protesters. We also demand that the IPCMC be immediately set up in order to protect citizens of Malaysia from the unlawful acts of the police.

for Malaysians Against Death Penalty and Torture (MADPET)
29th May 2006

Posted by Charles Hector at 7:56 AM No comments: 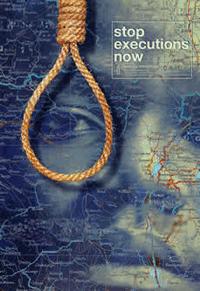 MADPET (MALAYSIANS AGAINST DEATH PENALTY AND TORTURE) calls for the immediate removal of the clauses imposing the death penalty in the Water Services Industry Bill 2006, which came up for second reading in Parliament today(10/5/2006).

Section 121, under Part X : General Offences and Penalties of this Bill, which deals with the offence of water contamination provides that “…a person who contaminates or causes to be contaminated any watercourse or the water supply system or any part of the watercourse or water supply system with any substance (a) with the intention to cause death; (b) with the knowledge that he is likely to cause death; or (c) which would likely endanger the life of any person ….[and]… where death results shall be punished with death or imprisonment…”

The Malaysian Bar, a body representing over 12,000 Malaysian lawyers, at its 60th Annual General Meeting held on 18/3/2006 passed a Resolution calling for the abolition of the death penalty in Malaysia, an immediate moratorium on all executions pending abolition and the commutation of the sentences of all persons currently on death row.

It must be pointed out that a recent television poll done by RTM 2 during the Hello on Two programme on 7/5/2006 showed that 64% of Malaysians are for the abolition of the death penalty in Malaysia. This program has an estimated audience of 80,000. It is thus important that members of Parliament, the representatives of the people respond to the aspirations of Malaysians and remove the death penalty from the Water Bill and all other laws of Malaysia.

We therefore call on all Parliamentarians, from both the Barisan National ruling coalition and the Opposition, who value human rights, justice and mercy to immediately cause the removal of the provisions that provide for the sentence of death.

for Malaysians Against Death Penalty and Torture (MADPET)

PENANG, May 8 (IPS) - While there is a global trend toward abolishing the death penalty, the Malaysian government is set to add more entries to its list of capital offences -- like contamination of water and rape.

A new Water Services Industry Bill is one of two water-related bills due for a second reading in parliament this week. The bill seeks to revamp the way water is managed in the country, transferring control of state water authorities and privatised firms to a single federal regulatory body.

But it also provides for capital punishment for serious cases of water contamination that result in loss of life.

Opponents of the law believe the proposed rules are draconian and unworkable. Moreover, they do not address the real causes of water pollution.

"Most of the time, the real offenders are likely to be companies and you can't hang the companies," said Charles Hector, a human rights lawyer who was one of the coordinators of the campaign network Malaysians Against Death Penalty and Torture (MADPET). "So who would face the death penalty then -- the chairman of the board? All the directors? The general manager? The administrative officer? It's absurd."

Hector told IPS there was no need to add to the death penalty laws as there are already provisions in the penal code that cover the intention to kill someone. "Besides," he added, "we are against the death penalty as it doesn't address the real issues."

More than half the rivers in Malaysia are polluted by raw or partially treated sewage as well as industrial effluents, agricultural run-offs, waste from animal husbandry and land development, and municipal rubbish.

These can pollute sources of drinking water. After a flood in February, residents around Kuala Lumpur complained of smelly water coming from their taps. A common complaint at other times is of murky water in parts of the country.

The soaring costs of maintaining the rivers prompted the government of the developed state of Selangor to announce in February that it would privatise three key rivers to firms, which would be tasked with ensuring their cleanliness. Critics argue that this is not the solution as the sources of river pollution have to be tackled.

The new water bills are being tabled at a time when the private sector has been eyeing a larger stake in water treatment, supply and distribution.

Top officials at the Energy, Water and Telecommunications Ministry could not be reached for comment about the provision for the death penalty despite several attempts. That leaves Malayasians only speculating why that provision was added.

"I think the death penalty was included because they had terrorists in mind" who might deliberately contaminate water sources, opposition Parliamentarian Teresa Kok told IPS, adding, however, that she was opposed to the death penalty.

Others have a different view. "It seems that the intention of the bill is merely to randomly prosecute harshly some nobodies to give an impression something is being done," was one comment in response to a blog entry on the issue at the popular website, Malaysia Today.

In contrast, Malaysia's neighbour, the Philippines, commuted the death sentences of all prisoners last month. President Gloria Macapagal-Arroyo has appealed to the Philippine Congress to abolish the death penalty, while Chief Justice Artemio Panganiban has described the country's death penalty laws as unconstitutional.

In Malaysia, however, the death penalty remains mandatory for drug trafficking (including possession), murder, certain firearms offences and offences against the king.

The majority of the death sentences meted out are for drug trafficking. Out of 52 people sentenced to death from 2004 until July 2005, 36 were convicted for drug offences. Last December, Deputy Internal Security Minister Chia Kwang Chye said that from 1960 through last October, 434 convicts were hanged while 172 cases were pending appeal.

But despite the country's tough stance, the drug menace remains serious. For MADPET, that proves that capital punishment is not the solution. It has never been proven that the death penalty effectively deters crime, the group says.

Parliamentarian Kok, however, is under no illusions that it will be easy to abolish capital punishment. She was a member of a Parliamentary select committee, made up predominantly of ruling coalition members, which traveled the country in 2004 seeking public views on proposed amendments to the penal code and criminal procedure code, which will be brought to Parliament on Thursday.

During the hearings, she said she got the impression that public sentiment was in favour of the death penalty. "The problem is that many among the public still want the death penalty in cases where the victim loses his or her life."

Kok told IPS that among proposed amendments to the codes is the provision for the death penalty for any act of terrorism involving the "release of poisonous substances into the environment". The death penalty would also be handed out to those found guilty of rape resulting in the death of the victim.

Kok pointed out that when the cabinet minister responsible for the law, Nazri Aziz, spoke out against the death penalty in March, he did not receive much support from his ruling coalition colleagues. "For me, a life is a life. No one has the right to take someone else's life, even if that person has taken another life," he had said.

Public opinion may be changing though. Nazri's comments were in response to an unprecedented resolution opposing the death penalty by the Malaysian Bar Council, the governing body for the country's 12,000 lawyers, at its annual general meeting on Mar. 18. The resolution, calling for the death penalty to be abolished and for a moratorium on all executions, was passed by a thumping 105-2 majority, with 21 abstentions.

And, during a recent morning talk show programme aired on state-run television station RTM2, a cell phone text message poll showed that just over 60 percent of those who responded supported the abolition of capital punishment. (FIN/2006)
Posted by Charles Hector at 6:58 AM No comments: