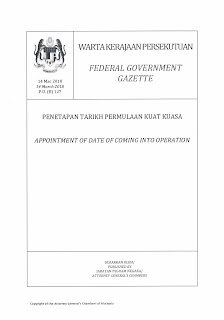 MADPET(Malaysians Against Death Penalty and Torture) is pleased that the Dangerous Drugs Amendment Act 2017, which received royal assent on 27/12/2017, has finally, after much delay, has come into force as of 15 March 2018.

The gazette notification appointing the date this new law comes into operation, that will abolish the mandatory death penalty for drug trafficking, giving judge’s discretion to be able to sentence those convicted of drug trafficking to an alternate sentence of life imprisonment with not less than 15 strokes of the whip, dated 8/3/2018 was signed by the Minister of Health. It was odd that it was not the Minister in the Prime Minister's Department Datuk Seri Azalina Othman, the facto Law Minister or the Home Minister.

It must be pointed out that this still unexplained delay has resulted in grave injustice to at least 10 persons, who had been sentenced to the mandatory death penalty this year until 15/3/3018, because judges still had no discretion to consider and impose any other sentence other than death penalty until the date the Act comes into operation. It must be noted that not all persons convicted and sentenced to death for drug trafficking would have been reported by the media. This 10 media reported cases included 5 Malaysians and 5 foreign nationals, being:-

This new law, when it comes into force, will only benefit persons who have yet to be convicted by the High Court. If already convicted and sentenced to death before the law came into force, then even the Appellate Courts will not have the power to review the death sentence, and impose an alternative sentence for drug trafficking. The only way, that those already sentenced to death can escape the death penalty is if the Appellate Courts set aside the conviction for drug trafficking.

Even after the amending Act comes into force, there are still serious flaws, including limitation on the factors that Judges could consider when imposing the appropriate just sentence after conviction. The law now states, that judges ‘…may have regard only to the following circumstances…’ being a limited list of  four matters. In criminal trials generally, judge will consider all relevant factors and circumstances of the case and/or the relevant convicted persons, including also age, whether he/she is a first time offender, etc.. before imposing a just and appropriate sentence.

At present, there is also mandatory requirement ‘…that the person convicted has assisted an enforcement agency in disrupting drug trafficking activities within or outside Malaysia…’ before a judge can impose a sentence other than death. This is unjust for it impacts of an individual’s right to a fair trial, for an innocent person, when convicted at the High Court may be forced to incriminate himself truthfully and/or falsely simply to avoid the death penalty. This ‘admission’ will also impact on his right of appeal against conviction and sentence to the Appellate Courts, be it the Court of Appeal and/or the Federal Court.

The new amendments also failed to deal with the 800 plus persons currently on death row for drug trafficking, including also others who have already been convicted before the Amending Act came into force.

MADPET calls for the immediate amendment of the law to ensure full, unfetterered discretion be given to judges  when it comes to sentencing those convicted of drug trafficking.

We also urge that judge’s discretion when it comes to the imposition of imprisonment not be simply limited to life imprisonment, but is extended  possibly by setting a more just and reasonable minimum sentence of not more than 5 -10 years especially for first time offenders;

MADPET also reiterates the call for a moratorium on executions pending abolition of the death penalty in Malaysia. 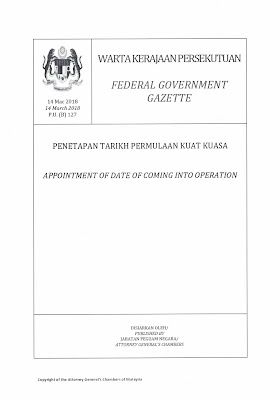 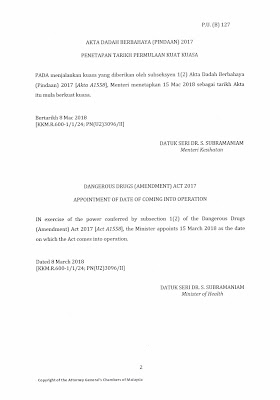 Posted by Charles Hector at 4:22 AM No comments: