Media statement by Democratic Action Party Member of Parliament for Batu Kawan and member of the Parliamentarians for Global Action Kasthuri Patto on Wednesday, 24 March 2017 in Penang.

Highly immoral, inhumane and a gross misconduct on the part of the Najib administration under the Barisan Nasional government to continue with executions on prisoners on death row when the Attorney General has not presented recommendations to the Cabinet to amend laws on the mandatory death penalty.

In the wee hours of this morning, 24 May 2017, 2 men had been executed at Sungai Buloh Prison – a Malaysian Chinese and Yong Kar Mun, 48 who was sentenced to death in 2009 for armed robbery.

The double execution this morning comes as a grave shock to Members of Parliament, the Malaysian Bar, Amnesty International, the Human Rights Commission of Malaysia (SUHAKAM) and other human rights bodies, but most importantly, the unconsolable grief of the 2 families who had not been notified on the exact date and time of the secretive nature of the executions of these two men.

Time and time again, lawmakers have been questioning the government in the Malaysian Parliament on the status of the abolition of the death penalty in Malaysia and stressing on an immediate moratorium on the death penalty pending possible amendments to laws that warrant the death sentence as a method of punishment and revenge.

On 5th September 2016 a Special Task force had been formed on the abolition of the death penalty attended by MP for Ipoh Barat M. Kulasegaran, SUHAKAM, Amnesty International, The Attorney General's Chambers, academicians, the Malaysian Bar Council, Home Ministry and also the National Security Council. On 1st March this year, the Cabinet was presented with the findings of a research by Roger Hood and International Centre for Law and Legal Studies (I-CeLLS) by the Attorney General himself whereby the Cabinet had decided and agreed that provisional amendments to Section 39B of the Dangerous Drugs Act 1952 by including that discretionary powers be given to courts to mete out the punishment befitting the crime.

In the last Parliament sitting in April, Minister in the Prime Minister's Department Azalina Othman cemented the fact that a memorandum from the Cabinet together with the proposed amendments to the DDA 1952 will be brought again to the Cabinet for further consideration. Dato Azalina also stressed that the mandatory death penalty has proven that it is NOT a deterrent to crime.

The government has committed countless times over the years, to amend provisions in the law to grant discretionary powers to the courts on drug related offences that carry the mandatory death penalty and yet appears apprehensive in committing to see it through. Why then the chest thump on transforming Malaysia into a nation that upholds and respects human rights when it is not serious on imposing a moratorium on all death row cases, across the board until discussions, meetings and even amendments are made?

While the Attorney General prepares the documents on the amendments of the law on the mandatory death penalty, executions are still going on in Malaysian prisons and in this year alone, Malaysia executed 4 people in 5 months!

The Najib administration has violated international human rights standards and laws in its persistent lack of transparency in carrying out executions.

It appears that the Malaysian government is more keen on executing prisoners than making just, reformist, progressive, positive changes in the law to uphold, promote, protect and defend human rights.

Until and unless Prime Minister Najib Razak pull the brakes and halt ALL executions and impose a moratorium until law reforms have been made to safeguard the sanctity and the spirit of the right to life and human rights in Malaysia, vision TN50 will be merely a hollow meaningless effort to transform Malaysia into a developed, progressive nation.

I call upon the Attorney General, the Prime Minister Najib Razak and the PM's Department to present the findings on the research to abolish the death penalty in the next Cabinet meeting and in the same vein to propose and to impose a moratorium on ALL death row prisoners until the matter is brought to Parliament, debated and passed.

Highly immoral, inhumane and a gross misconduct on the part of the Najib administration under the Barisan Nasional government to continue with executions on prisoners on death row when the Attorney General has not presented recommendations to the Cabinet to amend laws on the mandatory death penalty.

Kasthuri Patto
Member of Parliament for Batu Kawan
Publicity Secretary of Wanita DAP
Member of the Parliamentarians for Global Action (PGA) for the Abolition of the Death Penalty
Democratic Action Party
Posted by Charles Hector at 1:25 PM No comments:

Mohamad Thaqif Amin Mohd Gaddafi died at 2.06pm 26/4/2017(Friday) at Hospital Sultan Ismail in Johor Bahru.......Thaqif was admitted to Sultan Ismail Hospital (HSI) on Wednesday for injuries to his legs after he was allegedly beaten by the assistant warden of the religious school he was attending....On Friday, HSI doctors amputated his legs in a bid to prevent infection...

It is Time to Abolish Corporal Punishment

The Malaysian Bar is deeply saddened by the death of 11-year-old Mohamad Thaqif Amin Mohd Gaddafi.  We are appalled by the circumstances that led to his tragic death. 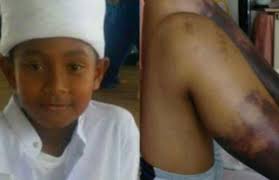 Questions have now been raised about the proper supervision and oversight of tahfiz schools in general, given that they fall outside the scope of the Ministry of Education.  The issue of employment of suitable staff who are adequately qualified and trained, and have the appropriate temperament to work with children, also needs to be addressed.

The tragic and untimely demise of Mohamad Thaqif Amin Mohd Gaddafi leads to the question of whether it is time to abolish all forms of corporal punishment.  It is, at the very least, a cruel and inhumane punishment and, in this young boy’s case, very likely constituted excruciating pain and even torture.

It should be noted that the amendments to the Child Act 2001, brought into force on 1 January 2017, have done away with the offence of caning of children by the civil courts.  It is time to extend this abolition to other courts, schools and even private homes, as caning can so easily be — and has indeed been — abused.  The death of even one child as a result of corporal punishment is one too many.

The Malaysian Bar extends its deepest condolences to the family and loved ones of Mohamad Thaqif Amin Mohd Gaddafi.

Khairil Ashraf
| April 26, 2017
His aunt says it may have been due to his unstable heart condition. 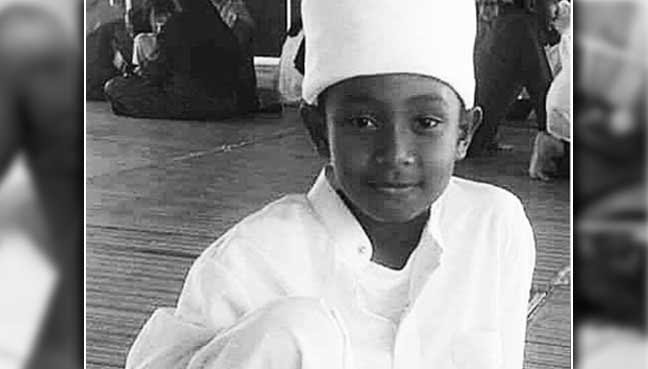 PETALING JAYA: The 11-year-old who slipped into a coma after undergoing surgery to amputate both his legs has died.

“He may have died due to his unstable heart condition,” Thaqif’s aunt Dzuraidah Ahmad told FMT when contacted.

Thaqif was admitted to Sultan Ismail Hospital (HSI) on Wednesday for injuries to his legs after he was allegedly beaten by the assistant warden of the religious school he was attending.

On Friday, HSI doctors amputated his legs in a bid to prevent infection to tissues and blood cells in his body. The following day, though, he lapsed into a coma.

Doctors later found that his right hand had turned black due to a bacterial infection and blood clots had started to form on his left shoulder. They informed his family that his arm had also turned necrotic.

Thaqif had been due for further surgery to amputate his right arm this morning. However, it was postponed as the condition of his heart was not stable.

His remand order was due to expire today, but it was extended for another three days until Saturday to facilitate the probe into the case.

Dzuraidah previously told The Star that Thaqif had complained to his mother about the beatings and also wrote in his diary about how the abuse had started last month.

“Dear Allah, please open my parents’ hearts to allow me to transfer to another school because I cannot stand it anymore. Please, Allah, make my wishes come true,” the daily quoted from one of Thaqif’s diary entries, as related by his aunt. - FMT News, 26/4/2017

Posted by Charles Hector at 1:14 AM No comments: