Abolition of death penalty in Malaysia?
by Churchill Edward. Posted on October 30, 2011, Sunday
ABOLITION of the death penalty will not come so soon in conservative Malaysia despite efforts by a few to change the mindset of the public at large.
Public opinion suggests that support for the mandatory death penalty as punishment for murder is still strong despite arguments by abolitionists that the death penalty brutalises society. 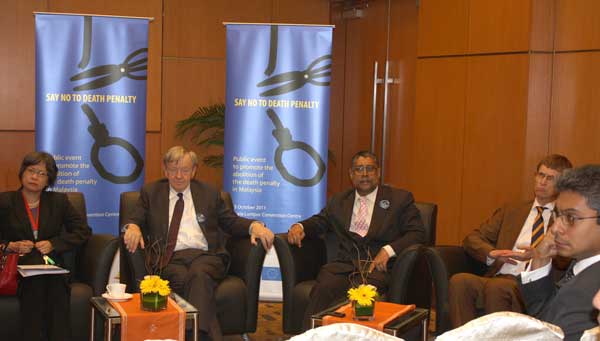 Posted by Charles Hector at 6:58 AM No comments:

Speech by Dato' Seri Nazri Tan Sri Aziz, Minister in Prime Minister's Department, at the Public Seminar on the Abolition of Death Penalty on 13th October 2011 in Kuala Lumpur
Salutations and greetings

Moving ahead for a more humane world

1.     First of all, I would like to thank the European Union Delegation to Malaysia and Ambassador His Excellency Mr. Vincent Piket for organising this very important public seminar on the abolition of death penalty in Malaysia.
2.     I would also like to acknowledge the presence of the Attorney-General Tan Sri Abdul Ghani Patail and members of his Chamber. Let me also take this opportunity to thank my parliamentary colleagues and members of the civil society whose presence today gives this cause a semblance of bipartisan and society-wide support.
3.     His Excellency Mr. Piket called on me in June 2011 in Parliament House to request for my support for this occasion, to which I immediately and gladly consented, fully aware of the contentions surrounding the death penalty in Malaysia and internationally.
4.     I would like you to forgive me for being upfront and candid that I am NOT giving blanket support for the immediate abolition of death penalty in Malaysia. I am supporting this seminar because of the worthiness of the subject which requires rational consultation with the widest possible audience. It is also time for Malaysia to move ahead and not to take a backseat in the international discourse on human rights.
Moving ahead
5.     Rethinking about the death penalty is part of the Government's effort to move ahead with the times for a more humane world. Prime Minister Dato' Seri Najib Tun Razak has spoken about Malaysia as a model of moderation on the world stage at the United Nations last year, and the Government is embarking on reviewing outdated laws, such as the Internal Security Act and the various Emergency declarations, and to adopt new laws that comply with human rights principles. Reviewing the death penalty is in line with that direction.
6.     The forum today is held in conjunction with the World Day Against the Death Penalty on 10th October. The theme for this year's World Day focuses on “The Inhumanity of the Death Penalty”, highlighting the inhumane nature of death penalty from the potential flaws in sentencing to the physical and mental sufferings of inmates awaiting execution on death row.
7.     Therefore, the discussion on the abolition of death penalty is a noble cause and a very timely effort.
Noble cause
8.     It is noble because, as men and women holding worldly power, our role is not to play god but to ensure that justice prevails in our societies. Our task in government is to find the most humane yet effective ways to uphold justice for our citizens and humankind in general. Taking away the lives of convicted criminals should be the last resort in the rarest instances and not a norm.
9.     Reviewing the death penalty is a timely effort. More than two thirds of the world's countries have abolished the death penalty in law or in practice.
·        97 countries have abolished the death penalty for all crimes;
·        8 countries have abolished the death penalty for all crimes except
extraordinary crimes such as those committed in times of war;
·        34 countries are de facto abolitionists: the death penalty is still provided for in legislation but no executions have been carried out for at least ten years;
·        Hence, effectively, 139 countries have abolished the death penalty de jure or de facto. However, 58 countries and territories still uphold the death penalty but only 23 countries carried out executions in 2010.
10.                         Noting also that the last few decades of "Tough on Crime" thinking, especially in the United States but not exclusively, has not been effective in reducing crime.  The failure of the "Tough on Crime" movement taught us that it is necessary to take a more holistic view about crime and address the root causes of crime and not to just focus on punishment. Further, it is better to err on the caution then to execute an innocent person.
11.                        Towards this end, the Home Ministry has embarked on parole, social service and other alternative punishments. The next logical step is for us to examine the effectiveness of death penalty in curbing crime and ensuring justice for all, including victims of crime and the accused.
Our agenda
12.                         As I said earlier, I am not here to give blanket support for the abolition of the death penalty. The Government is committed to reevaluating, rethinking and reviewing the death penalty.
13.                         In June 2011, the Malaysian Parliament held a roundtable on the death penalty attended by elected representatives, legal luminaries and members of the civil society. It is part of our modest attempt to begin the consultation process.
14.                        In the roundtable, the Attorney-General's Chamber made public for the first time its policy decision not to enact new law that carries the death penalty. The Chamber is also considering whether the death penalty should be abolished entirely or partially. There are also discussions about a middle path approach to remove the mandatory death sentence and return discretion to the judges.
15.                        The participants of the roundtable passed a resolution calling on the Government to impose moratorium on death penalty while a thorough review is being conducted. The Government is considering all views being presented in the said roundtable as well as today's public seminar.
16.                         In conclusion, I commend the European Union Delegation to Malaysia for its effort in organising this landmark seminar and reiterate the Malaysian Government's commitment to move ahead with time to bring forward a more humane world.
The End
Note:- In his speech, there were additions and elaborations, but the above is essentially the main points that were made. Speech was delivered at Abolition of Death Penalty Event - 13/10/2011, 2pm, KL Convention Centre

The Attorney General unfortunately did not attend.
Posted by Charles Hector at 5:07 AM No comments:

EU for the abolition of the death penalty in Malaysia

Why we should put an end to the death penalty

Posted by Charles Hector at 10:02 PM No comments: