Malaysia, disappointingly, voted against the Death Penalty resolution - odd as Malaysia is in the process of finalizing its study on the abolition of the death penalty...Logically, Malaysia should have abstained rather than objected...

UNITED NATIONS GENERAL ASSEMBLY(UNGA) MORATORIUM ON THE USE OF THE DEATH PENALTY RESOLUTION..19/12/2016


[117 of the UN’s 193 member states voted in favour of the proposal. Only 40 states voted against it and 31 abstained at the vote]

Below the Draft Test of the Resolution(for the final text, visit UN Website)

Guided by the purposes and principles contained in the Charter of the United Nations,

Reaffirming the Universal Declaration of Human Rights, the International Covenant on Civil and Political Rights and the Convention on the Rights of the Child,

Welcoming all relevant decisions and resolutions of the Human Rights Council,

Mindful that any miscarriage or failure of justice in the implementation of the death penalty is irreversible and irreparable,

Noting ongoing local and national debates and regional initiatives on the death penalty, as well as the readiness of an increasing number of Member States to make available to the public information on the use of the death penalty, and also, in this regard, the decision by the Human Rights Council in its resolution 26/2 of 26 June 20145 to convene biennial high-level panel discussions in order to further exchange views on the question of the death penalty,

Recognizing the role of national human rights institutions in contributing to ongoing local and national debates and regional initiatives on the death penalty,

Emphasizing the need to ensure that persons facing the death penalty are treated with humanity and with respect for their inherent dignity and in compliance with their rights under international human rights law,

Noting the technical cooperation among Member States, as well as the role of relevant United Nations entities and human rights mechanisms, in supporting State efforts to establish moratoriums on the death
penalty,

Bearing in mind the work of special procedures mandate holders who have addressed human rights issues related to the death penalty within the framework of their respective mandates,

1. Reaffirms the sovereign right of all countries to develop their own legal systems, including determining appropriate legal penalties, in accordance with their international law obligations;

2. Expresses its deep concern about the continued application of the death penalty;

3. Welcomes the report of the Secretary-General on the implementation of resolution 69/186 and the recommendations contained therein;

4. Also welcomes the steps taken by some States to reduce the number of offences for which the death penalty may be imposed, as well as steps taken to limit its application;

5. Further welcomes initiatives and political leadership encouraging national discussions and debates on the possibility of moving away from capital punishment through domestic decision-making;

6. Welcomes the decisions made by an increasing number of States from all regions, at all levels of government, to apply a moratorium on executions, followed in many cases by the abolition of the death penalty;

7. Calls upon all States:

(a) To respect international standards that provide safeguards guaranteeing protection of the rights of those facing the death penalty, in particular the minimum standards, as set out in the annex to Economic and Social Council resolution 1984/50 of 25 May 1984, as well as to provide the Secretary-General with information in this regard;

(b) To comply with their obligations under article 36 of the 1963 Vienna Convention on Consular Relations, particularly the right to receive information on consular assistance;

(c) To make available relevant information, disaggregated by sex, age, and race, as applicable, and other applicable criteria, with regard to their use of the death penalty, inter alia, the number of persons sentenced to death, the number of persons on death row and the number of executions carried out, the number of death sentences reversed or commuted on appeal and information on any scheduled execution, which can contribute to possible informed and transparent national and international debates, including on the obligations of States pertaining to the use of the death penalty;

(d) To progressively restrict the use of the death penalty and not to impose capital punishment for offences committed by persons below 18 years of age, on pregnant women or on persons with mental or intellectual disabilities;

(e) To reduce the number of offences for which the death penalty may be imposed;

(f) To ensure that those facing the death penalty can exercise their right to apply for pardon or commutation of their death sentence by ensuring that clemency procedures are fair and transparent and that prompt information is provided at all stages of the process;

(g) To establish a moratorium on executions with a view to abolishing the death penalty;

8. Calls upon States which have abolished the death penalty not to reintroduce it, and encourages them to share their experience in this regard;

9. Encourages States which have a moratorium to maintain it and to share their experience in this regard;

10. Calls upon States that have not yet done so to consider acceding to or ratifying the Second Optional Protocol to the International Covenant on Civil and Political Rights, aiming at the abolition of the death penalty;

11. Requests the Secretary-General to report to the General Assembly at its seventy-third session on the implementation of the present resolution;

12. Decides to continue consideration of the matter at its seventy-third session under the item entitled “Promotion and protection of human rights”. 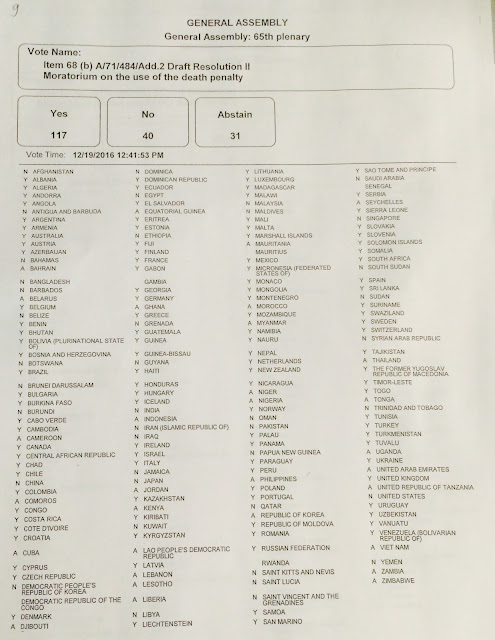 Some observations of a friend as follows:-

The plenary session of the UN General Assembly adopted yesterday its sixth resolution on a moratorium on the use of the death penalty with 117 votes in favour, 40 against and 31 abstentions.

The text of the resolution includes some positive new additions compared to 2014, including:

-a reference to the role of national human rights institutions in contributing to ongoing local and national debates and regional initiatives on the death penalty;
-a request to make available relevant information on any scheduled execution, in addition to other information already listed in previous resolutions;
-a call on states that still retain the death penalty “To ensure that those facing the death penalty can exercise their right to apply for pardon or commutation of their death sentence by ensuring that clemency procedures are fair and transparent and that prompt information is provided at all stages of the process;”

Unfortunately the opponents of the resolution managed this year to include in the resolution a new paragraph that recalls their sovereign right to determine their legal systems, as follows:

“1. Reaffirms the sovereign right of all countries to develop their own legal systems, including determining appropriate legal penalties, in accordance with their international law obligations;”

While the number of the votes in favour remained the same as in 2014, there have been some interesting changes in the voting, both positively and negatively:

This leaves us with a somewhat bittersweet result: on one hand, the number of votes in favour has not become higher compared to 2014; on the other hand, some of the positive changes might signal the beginning of new journeys towards abolition.

2016 has been a very challenging year all around, including for the death penalty-some of the negative vote changes were somewhat expected, some perhaps speak to greater human rights challenges.

Thank you nonetheless for your continued work to get us all here-look forward to more work together in the new year.
Amnesty International’s public statement on yesterday’s vote can be found below and at this link: https://www.amnesty.org/en/documents/act50/5389/2016/en/
Posted by Charles Hector at 12:42 AM